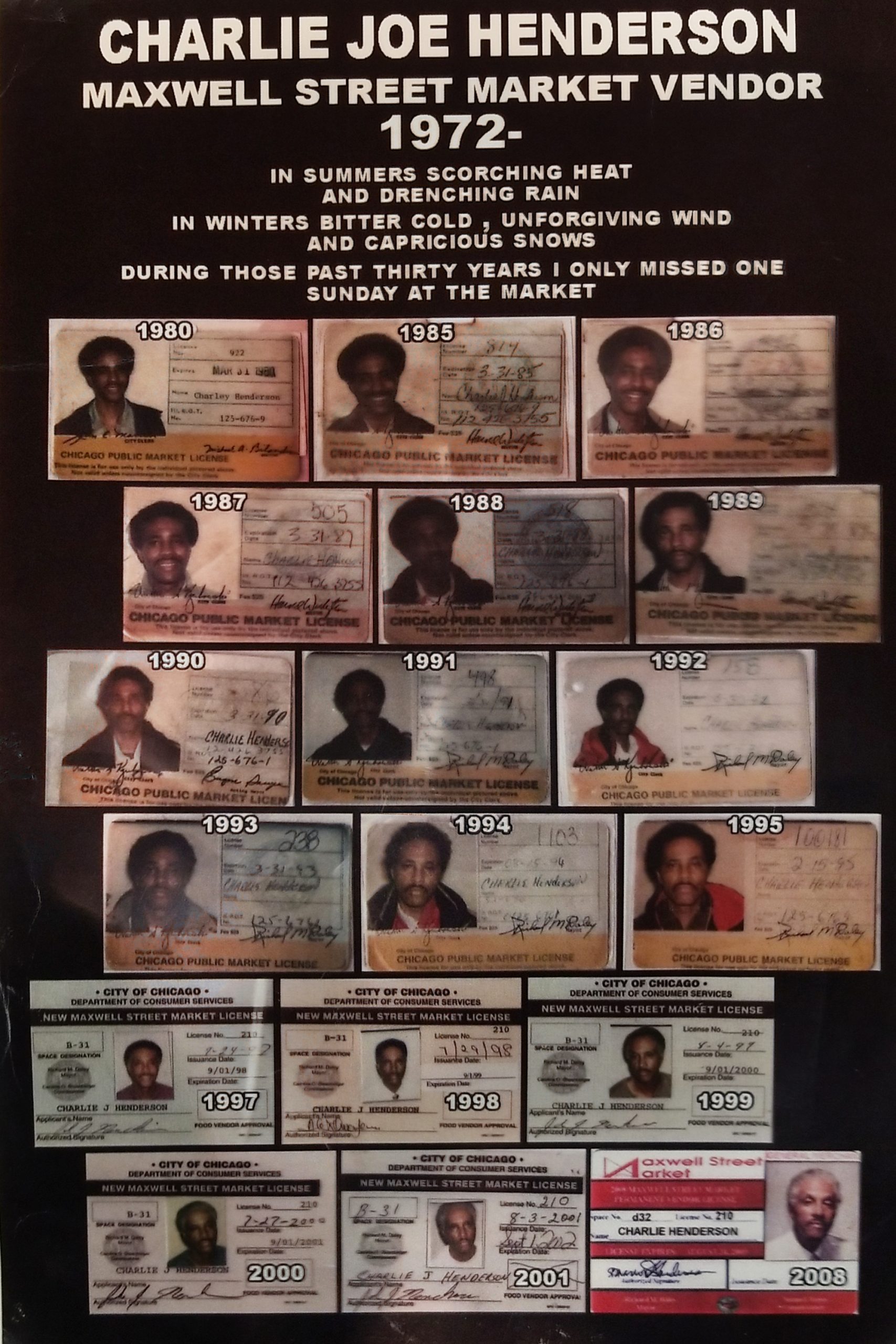 Charlie Joe Henderson, known as the Mayor of Maxwell Street, died on January 23. He was 82. Along with a partner, Earnest Jackson, they were the main people who rented tables to vendors in the Old Maxwell St Market. It was a very remunerative business since the Market, up to its elimination in 1994, had over a thousand vendors on Sundays in good weather. In the 1990s, this so impressed Professor Alfonso Morales at University of Wisconsin, then a PhD student at Northwestern University, that he wrote his PhD dissertation about them. His central concept was the Ultra Minimal State which was about maintaining social order with a minimum of government resources. Morales says,” The social order at the Market was created and maintained by Henderson and Jackson, private entrepreneurs, whose work prevented disputes among vendors.  Vendors respected the relationships made possible by renting tables to vendors from every ethnic group.”  Steve Balkin, Professor Emeritus at Roosevelt University, says, “ Charlie Joe was a sweet, honest, hard working guy who was concerned about preserving the southern infused culture of Maxwell St. and would always help those working to save the Market in all its locations. I especially loved the posters and buttons he designed so shoppers could have a keepsake of the Market. My favorite was the one he made with an amalgam of all the Maxwell Street photo licenses he had since he started vending there. Andy Warhol would have really liked Mr. Henderson’s art.“

Marie Henderson, Charlie’s wife said, ”Charlie loved to read. As a kid in Georgia, Charlie would sneak into the school library at night and read books.  In the South, where school system inequality prevailed, he figured a way to get a more decent education.“

Mr. Henderson was brought to Chicago from Flovilla, Georgia at age 15 by his family. He was part of the Great Migration. In 1961 his mother introduced him to Marie who would be his wife and lifelong business partner. She helped run his businesses and birthed 3 sons and 2 daughters who became successful adults from the experiences helping their parents run businesses, learning family history, appreciating education, and being helped by the spiritual guidance of the Jehovah Witnesses.

In 1963, Mr. Henderson opened a general store on W. Madison Avenue. He was one of the first Black people to own a business on Madison Avenue. In the 1970s, he cleverly changed the name of the store to Tiki Alley, decorating the interior with artificial palm trees and bamboo. Sales increased and in the process he provided memorable shopping and an ersatz travel experience to residents of the West Side.

In 1972, he started vending at the Maxwell Street Market, selling Blues LP records, cassette and 8 track tapes. His table was by Maxwell and Newberry, near Nate’s Delicatessen, and he was selling at the Market the day the Blues Brothers movie was shot there, a block away.

He loved Blues music. Peter Pero, a Chicago writer, says, “If you wanted an old vinyl record but had no money, Charlie would give it to you for free. He taught his whole family to respect the customer and to respect the music.  Morales remarked,” Charlie Joe would often say to me: The Blues belongs to everyone. The Blues is as real as it gets.”

In 1986 he opened Out of the Past Records at 4407 W. Madison, selling old and new Blues, Rhythm-and-Blues, and Rock music in various formats. People from all over the world, who were a collector of Blues records, would visit this store on their trip to Chicago.  Balkin says, “To Blues fans, his store was and still is, kind of, a Chicago Metropolitan Museum of Blues. Luckily a niece will be taking over this business.” Charlie Joe’s son Charlie has continued to reproduce his dads’ posters and they are for sale at the record store for $15 and up. (ph: 773-626-3878).   In 2017, Blues musician and film maker Bonnie Mckeown wrote a good article about Out of the Past Records for the Austin Weekly, titled:

Iconic West Side Store: Out of the Past Records.

When the Market was shut down by UIC and Mayor Daley in 1994, Mr. Henderson took a big economic hit. 800 vendors did not move to the New Maxwell St. Market the City created on Canal St..  Still Charlie Joe continued to rent tables and vend there; and he moved every time the Market moved, even though every move meant fewer vendors to rent tables to. He sold at the New Maxwell Street Market every Sunday until 2 years ago, when he became ill. McKeown remarks, “In 2019 he was practically blind, yet, with the help of his sons, he continued to be at the Market. His energy and concern for the Market and its people helped maintain the legendary status, in Chicago history, that the Market has.  While still sad about the loss of the old Market, he had hopes that the New Maxwell Street Market will have a revival and gain in size to continue to be a celebratory and economic resource for immigrants and minorities. “

Funeral services will be private and interment will held in Indian Springs, Georgia, his birthplace.