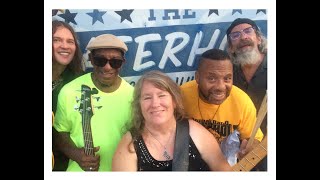 September 26, 2021
Lori ‘Low-reen’ Lewis, the lead singer and band leader is a registered nurse working with homeless people.  She was a student of Chicago Blues legend David ‘Honeyboy’ Edwards and wanted to give back for the help she got learning to play Blues from Mr. Edwards and many other Blues musicians she saw play on Maxwell Street and who let her sit-in.   She says, “There is no university that teaches Blues. You’ve got to learn it from the street.  I am thankful for their inspiration. But right now people on the street are especially suffering from Covid-19 and its variants.  We want to tell these communities about the importance for vaccination in a folk idiom that will resonate.”    Lewis says further, “Thanks to Maxwell Street musicians and record companies that got their sounds spread throughout the globe, Blues is part of world popular culture.  We hope this music video will be shown nationally and globally to get better control of this pandemic.”  Producer Steve Balkin, Professor at Roosevelt University, says, “Our next step is to do versions of this video in Spanish, Arabic, Mandarin, French, and German. We want to inspire musicians all over to do their own version of a vaccine encouragement song in local languages and song styles.”  Low-reen is founder of the Maxwell Street Market Blues Band, having learned to play the Blues plugged into a storefront for electricity in the Maxwell Street style.
For this video, Maxwell St. Bluesman and Alligator records recording artist Toronzo Cannon wrote the lyrics.  Being a retired lifelong CTA Bus driver, he has a good sense of how to relate to people on the street.   All in this project hope the video and its message will get traction in social media, mass media, and on the street; and save some lives.