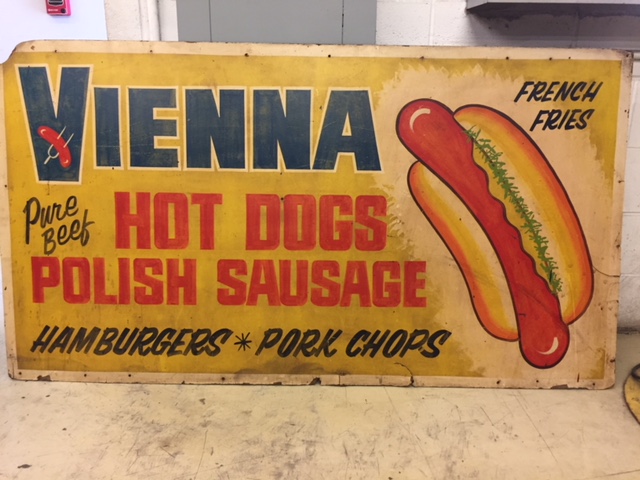 The Vienna Beef Factory Store at 2501 N. Damen now hosts a “Museum” inside a portion of its former factory building to celebrate 125 years of Vienna Beef, Ltd.  The company was founded by Austrian-Hungarian immigrants Emil Reichel and Samual Ladany with the debut of their unique “Vienna” sausage at Chicago’s World Columbian Exposition in 1893.  Reichel and Ladany opened their first sausage shop just north of Maxwell Street at 1215 S. Halsted, and eventually expanded to 1215-1217 S. Halsted with a factory building that produced product for virtually every street corner of the Maxwell Street Market and became nationally recognized. The company remained at the Halsted location until 1970, when it moved to its store location currently on Damen.

The Maxwell Street Foundation has since loaned three architectural remnants from Vienna’s former building at 1215-1217 S. Halsted dating to the 1924 renovation of the building’s entranceway by noted architect, Alfred Alschuler.  The renovation by Alschuler, a Jewish architect, is just one example of the early work of Jewish architects in the historic Maxwell Street area who later became nationally and internationally renowned.  Sadly, the Vienna Beef factory building on Halsted was demolished in 1996 for the expansion of the south campus of the University of Illinois at Chicago.

One hand-painted pressboard sign (3’x5’6″), attributed to Gus Korn who painted the iconic Vienna Beef signs from the 1950s through the 1970s, is also on loan to the Vienna Beef History Museum by the Maxwell Street Foundation, and is pictured here.

The Vienna Beef History Museum is open to the public free of charge at the Vienna Beef Factory Store on Saturdays from 11 a .m. – 2 p.m. through the end of the year, and features a rich selection of photographs, machinery and memorabilia that spans the entire history of Vienna Beef, Ltd.  The Maxwell Street Foundation applauds Tom McGlade, Vice President of Marketing/eCommerce, for his curation of the Museum exhibition.  (Mr. McGlade formally served on the Maxwell Street Foundation Advisory Council.)