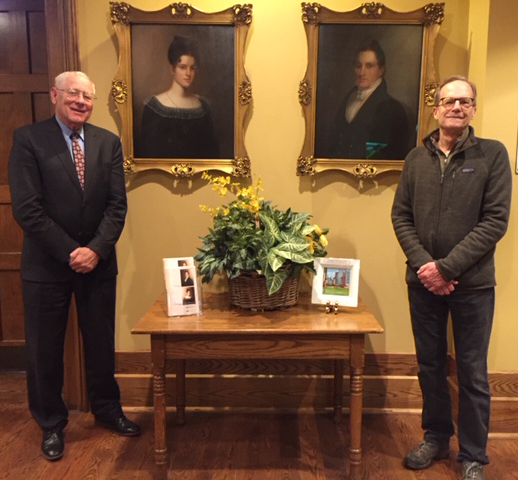 The portraits of Dr. Philip Maxwell, for whom Chicago’s Maxwell Street is named, and his wife Jerusha are displayed at Saint Ignatius College Prep inside the school’s Main Entry that has fronted the Maxwell Street neighborhood since 1869.  Currently on loan to Saint Ignatius, the portraits were donated to the Maxwell Street Foundation by Leslie Heaton Evans in 2010. Ms. Evan’s brother Jonathan (Jay) Heaton, visited Chicago in Fall 2019 when he viewed the portraits for the first time since they were professionally conserved and mounted for display.  Jay recalls that he always considered them to be important to his family, even though he and his siblings did not understand the connection of Mr. and Mrs. Maxwell to the family until his sister Leslie unravelled the family history to discern that she and her siblings were 5th generation descendants of the Maxwells.

The oil on panel paintings are believed to be the wedding portraits of the Maxwells who married in 1822. They are attributed to portraitist Abraham G.D. Tuthill (1776-1843) who had studied with noted artist Benjamin West in London. A generous gift each from the Richard H. Driehaus Charitable Lead Trust and Dr. Samuel and Mrs. Charlene Wexler provided for the conservation of the oil panels and repair to the frames, and from Saint Ignatius College Prep for the archival glazing.

Dr. Philip Maxwell and his wife Jerusha were early citizens in Chicago in 1832 when Philip took a post as assistant surgeon at Fort Dearborn. Following the fort’s closure in 1836, he remained in the military under General Zachary Taylor in Florida until he resigned his military post and returned to Chicago in 1844 when he became city physician. In 1848, he joined the practice of Dr. Brockholst McVickar at Lake and Clark Streets near the popular Tremont House, where his spirited discussions became legend and he fulfilled his role as a physician and formative character in the early days of the city of Chicago. In 1855, after publicly declining a nomination to become Chicago’s mayor, he built a retirement home on Geneva Lake in Wisconsin and lived there until his death in 1859. The Maxwell’s Italianate home in Lake Geneva is recognized today as the first of Lake Geneva’s historic mansions.

Collaboratively developed with Saint Ignatius College Prep, the formal Chicago debut of the Maxwell portraits occurred with a program and reception on April 26, 2018 at the school and their display is  extended until November 1, 2022. In Jay’s words regarding his past Chicago visit, “… in a trip full of amazing architecture, our Tuesday tour of St. Ignatius takes the prize … St. Ignatius, one of only five public buildings to escape the Great Chicago Fire, was a total surprise. I have never been in an original American building of such stature.”

The Maxwell portraits will remain on loan to Saint Ignatius through November 1, 2022.  Please email the Maxwell Street Foundation at  info@maxwellstreetfoundation to learn more about the history of these unique portraits and the Maxwells.